Tag Archive for: process for making an animated video 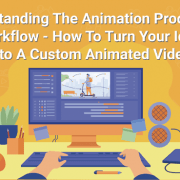 2). Identifying an animator or studio

The first stage in animation is to figure out what kind of animated video you want to make. Is this going to be a short piece? Or a full on animated movie? What do you want people to feel, experience and do after they watch your video? These are the kinds of things you want to think about first so that you know what kind of animation freelancer or studio would be best suited to produce your animated video.

2). Identifying an animator or studio

After you’ve thought about what it is you’re actually looking for, take some time to shop around for animation freelancers or animation studios that have experience producing the kind of animation you are looking for. Reach out to them to schedule a call to discuss their creative process, animation production workflow, pricing, and request portfolio samples to ensure they can produce content similar to what you are looking for.

Quality animated videos cost $1000-$25,000+ per minute for 2D animated videos and $5,000-$50,000+ for 3D animated videos. Before you move forward with any animation steps, make sure you and your animators are on the same page in terms of what the total estimated budget will be and whether or not it will cost extra if you request more than a round or two of edits. Most animators and studios require 25-50% of the budget to be paid up front.

The next step of the animation production process is to document all your thoughts and ideas to share with the animation team so that they have as much information as possible when they create your script, storyboard and the custom art for your video. Include notes about your ideas for the script, the visuals and what kinds of people will be watching your video.

The script is the foundation for the rest of the animated video production workflow. It determines the overall length (and cost) of your video and what visuals will need to be created and animated in sync with the voiceover acting or narration. For reference, a 150 word script equals about one minute of video.

The storyboard provides blueprints for the design and animation team so that they know what to create during the animation process. Each slide of the storyboard should have a sentence from your script, a rough sketch or mockup of what you want to show in the scene, a list of the assets (audio and visual) that need to be created for this scene, and some bullet points to describe the order of operations of the animation/motion that happens on screen.

To get a great voiceover for your video, include notes with your script that tell the voiceover artist what kind of energy you want them to use,  how to pronounce difficult words and what sort of pacing they should use. Send your script to multiple voiceover artists and have them record a few sentences so that you can hear and feel how impactful their delivery will be. Once you’ve narrowed it down to your favorite voiceover artist, have them record the full voiceover and review it to see if it needs any slight tweaks. Before you approve the final draft of your voiceover, make sure you are paying for the proper commercial rights (if applicable) to use your voiceover.

One of the steps in creating an animation that you don’t want to outlook is carefully selecting the background music. Music influences the perception of every scene in your video. It sets the mood and enhances viewer perception of your content. Take some time to listen to many different options before making your decision. Sometimes you’ll need to wait until the first draft of your video is ready to get a sense of how the music actually enhances or detracts from your animated video. Other times, studios may select a handful of tracks for you to choose from and let you pick your favorite option. Either way, make sure that the music you use is properly licensed for the places you plan to show your video. Oftentimes, music requires a commercial license if you plan to use the music in a video for paid ads or on your website.

Reviewing art is one of the most exciting phases of the animated video production process. Typically, the animation and design team you work with will create multiple pieces of concept art for you to review. You should pick out your favorites and let the designers know what you like best about them – and what details you may want to refine further. After the designer has perfected one scene in the style of your choosing, they will create the rest of the art for your video and then give you an opportunity to review the art and ask for edits. Ensure you are happy with the style of your art before you move forward with the next animation step in order to avoid extra production costs.

Now that all the prep work is done, the animators are finally at the part of the animation production workflow where they start applying motion to the custom designed art and sync it to the voiceover and music. Typically, animation studios will allow you to review the first draft and request 1-2 rounds of simple edits while they add sound effects and additional visual touch ups.

Now that you’ve made it through all the steps of creating an animated video, it’s time to start showing it to people.  If you are using your video for commercial or marketing purposes, we recommend creating alternate intros and ending CTAs (call to action) so that you can A/B test different variations improve the overall conversion rate of your animated video.

The 3D animation production workflow usually has an extra step called an animatic – it’s like an ultra rough draft of your animated video composed of static images that are played in sync with the existing voiceover. The purpose of this is to ensure the animation will have the right timing before animators spend time animating. This is particularly useful to gauge the speed for comedic timing and emotional draw.

If you have any questions about making an animated video or the animation production workflow, click here to schedule a call with a member of Video Igniter’s production team.