Home » Video Igniter Animation Blog » How To Create A Storyboard For An Animated Video?

But first, what is a storyboard? A storyboard is a document that includes text and visuals to explain two things:

1). What art do the designers need to create?

2). How should the animators make the custom designed art move around?

How do you create a storyboard for an animated video?

Each page of a storyboard has four parts and you should include all of them when you make the storyboard for your animated video: 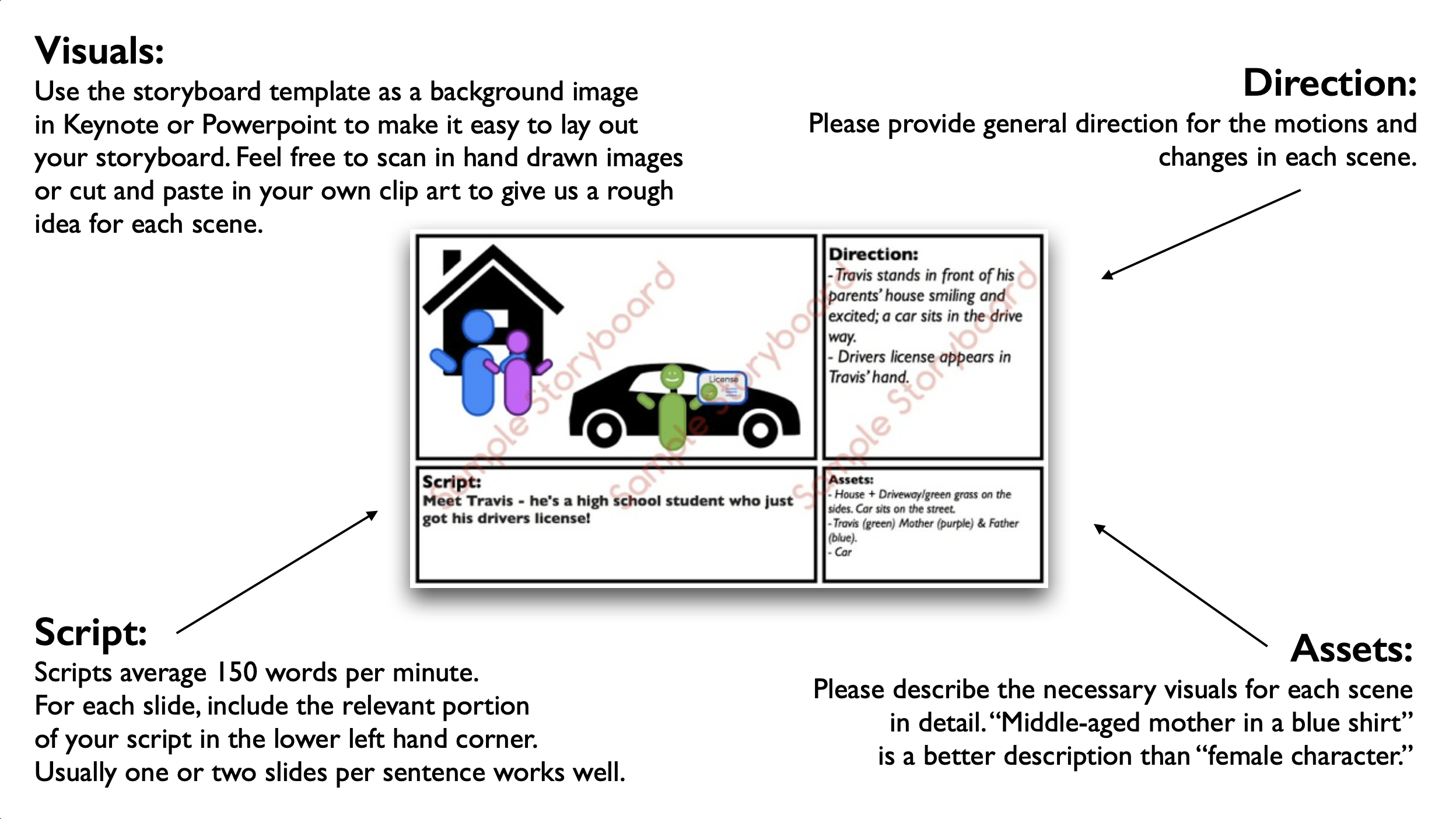 When you first start making the storyboard for your animated video, begin by taking each sentence from your script and put one sentence on each page of your storyboard. It’s possible that when you create your storyboard, you may find that it makes sense to break up a sentence over multiple slides because there’s a lot of motion and design information to explain to the animators. Alternatively if a sentence needs multiple slides to explain all the motion design, have the full sentence on each page and highlight the active part of the sentence by making that part of the sentence bold.

If a scene has a lot of detail, split the sentence into multiple slides.

Each slide of your storyboard should contain a mockup of the scene that is going to be designed for each sentence of the script. Your sketch or mockup doesn’t have to look professional – it just has to be adequate enough to communicate your idea. It’s our job to take your ideas and turn it into something real. Stick figure sketches are perfectly fine – a simple sketch on paper goes a long way – just take a photo of it and include it on the appropriate page of your storyboard.

Too timid to try sketching out your ideas? Use freely available images and icons online to create a rough mockup of the scene you want us to design. 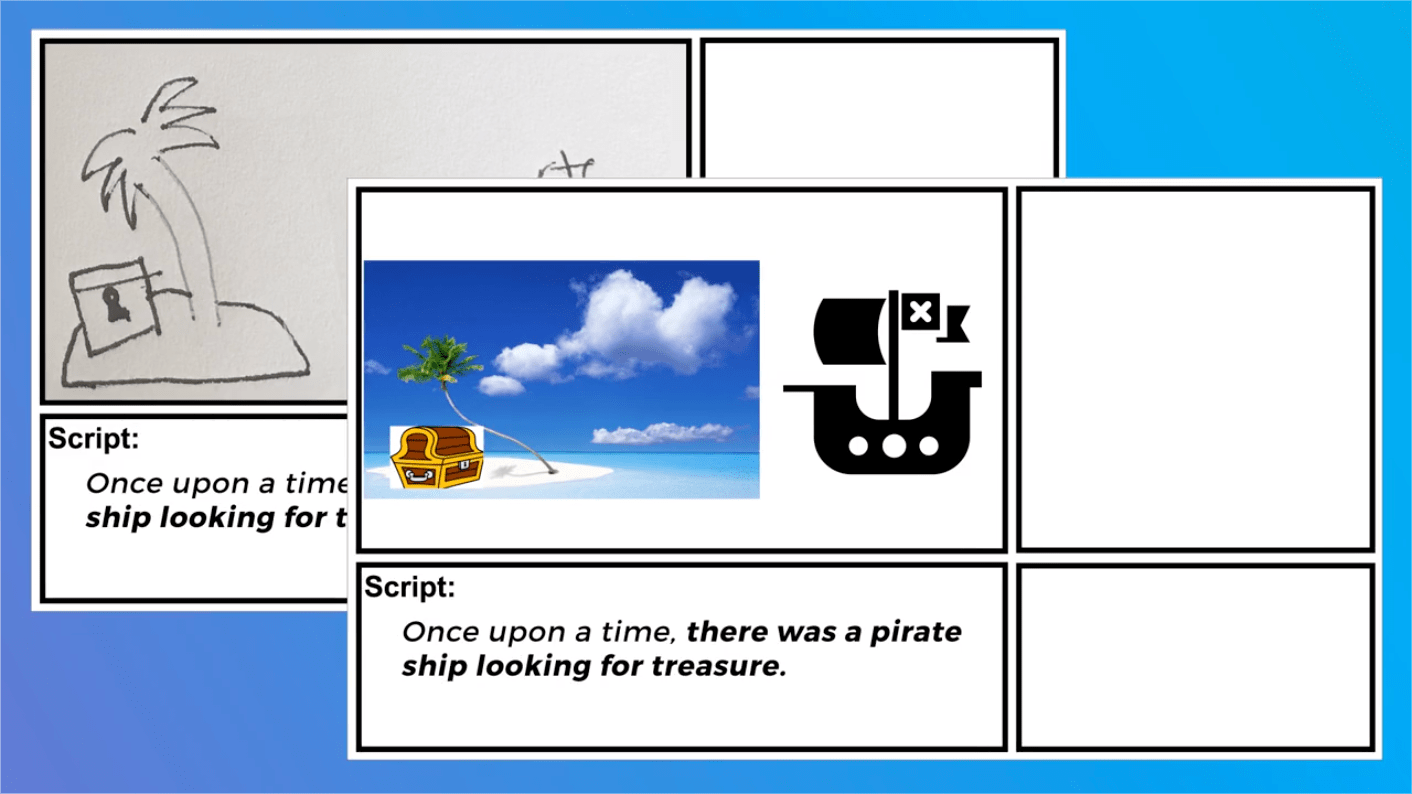 Examples Of Storyboards For Animated Videos That Were Created Using Sketches Or Icons And Clipart.

This is the most important part of creating a storyboard – use simple language to clearly explain what sort of motion design you want to happen during this part of the script. The more you can break down your ideas, the easier it will be for the animators to understand what they are going to animate. Simple language with bullet points is the best way to sequentially document the order of operations that needs to happen in a scene.

If you want an action to happen at a specific moment during the voiceover, it helps to say something like, “when the voiceover says, ‘____,’ do this _______.”

Use the upper right corner of the storyboard to explain to the animator what motion happens in the scene.

In the bottom right corner of the storyboard, include a list of all the assets that are needed for that scene. Below are examples of some of the kinds of assets you should include in your list:

Characters Examples: old fireman in uniform with a white beard, a zebra with white and blue stripes.

Stock Footage Examples: video of a bumblebee, picture of the inside of a plant cell.

For example – maybe there are a few different styles of desks that you would like to see in a scene. You could include one in the mockup in a slide for your storyboard, and then on the slide after that, include 3 photos of other styles of desks the designers could use as a visual reference for the scene. Or, perhaps you want a character to walk a specific way in a scene and you found a YouTube video of a guy that perfectly demonstrates the type of motion you want to see conveyed in your animation – including a link to the video for the animators to watch will be very helpful for them.

9 Things To Look For When Hiring An Animation Studio

What is a storyboard? And why do you need one?
Scroll to top