With so many different animation styles out there, we thought it would be helpful to present an overview of the most common types of explainer videos and provide a run down of their pros and cons to help you figure out what types of animation styles can be used for your video.

If you’ve seen a 2D animated video online, odds are, it was likely made using Adobe Flash or Adobe After Effects. These are two of the most popular programs for creating 2D animated videos because they enable an infinite range of different animation styles at a lower cost than producing a video with traditional frame-by-frame (hand drawn) animation.

Pros: Enables you to create infinite different types of animation styles. Very easy to make custom branded art.
Cons: This is what everyone does. Can be difficult to pick out which studio or freelancer is best for you.

Example of an Animated Explainer Video Created with Flash:

Example of a More Advanced Animation Created with Adobe After Effects:

Think of motion graphics as a type of animation that’s more like an animated diagram or a series of shapes, icons and text sliding around. Generally this is animation that doesn’t have people walking around. Instead, motion graphics are used like visual accents. Sometimes they are overlaid on top of live action videos, other times they’re inserted between scenes of a video to show an animated diagram that visually illustrates what a narrator is explaining.
Pros: Can be simpler to produce than traditional animation.
Cons: May not include enough detail for what you want to show or explain.

This is the ‘real’ old school style of animation. The kind where each frame is hand drawn by the animator. It enables the artist to create beautiful flowing animated details with realistic, smooth movements. It also takes a lot of time, skill and a huge team with an adequate budget to produce anything more than a few seconds long.

Pros: Visually unique compared to the glut of 2D animated content out there.
Cons: Expensive. Takes a long time and a big team to produce.

Kinetic typography is a type of animated video that relies heavily on animating text with flashy motion and designs to keep the viewer engaged. Sometimes characters and scenes get mixed in but typically the goal is to animate the words in visually unique ways in sync with the narrative voiceover.

Pros: When designed with proper timing, these videos do a great job at keeping viewer’s interest. It’s also possible to watch these videos without the sound on (i.e. in a social feed) and still be able to understand the content of the video w/out the audio.
Cons: Since the focus tends to be text-based, sometimes content that’s presented in kinetic typography videos should actually be an animated diagram (which you can totally mix into your video).

3D animation is ideal for when you want to take a viewer on a journey inside a 3D space to show what an environment is like or to understand the inner workings of a machine. 3D animation also works great for your standard business explainer video if you want to go for a high impact visual style that stands out from the rest. Just note that 3D animations take longer to produce, require a larger budget, and it’s not as easy to make changes to the video once production has begun. 3D animated video styles can look cartoon-ish (like Pixar movies) or they can be made to look like photo-realistic renderings of the real world.

Stop motion animation is created by setting up a scene (could be made of clay, paper, legos, etc), taking a photo, moving a few things slightly in the scene, and taking another picture. By repeating this process of taking photos of the scene with slight adjustments, the images can be combined to create a moving animated scene.

Pros: Fun and unique to watch.
Cons: Expensive and it takes a long time to do a good job – definitely can’t be rushed.

Sometimes you want to show what’s actually happening on a phone, tablet or computer screen. In this case, you can use different programs to record what is happening on screen to show exactly what is happening, rather than providing a high level story of what an app actually does. Motion graphics are sometimes mixed in to keep the viewer’s attention and to visually call out specific details on screen.

Pros: Great for showcasing how to use different websites, software and apps.
Cons: Generally kinda boring to watch unless there’s some unique motion graphics overlaid on top of the screen recording. Not great for sales/marketing videos, but that’s not what they’re really meant for anyway.

Whiteboard videos are another style of hand drawn animation – however, unlike Frame-by-Frame animation, where the animator draws each frame individually and then flips through them to make the image look like it’s in motion, whiteboard explainers are videos that show the artist in the act of drawing out visuals in sync with a voiceover.

Pros: Generally quick and less expensive to produce. Great at keeping the viewer’s attention.
Cons: They all look very similar so they’re not great for brand recognition.

Writing a rough draft of the script for your explainer video is very helpful for figuring out which styles will best lend themselves to your video. For tips on script writing, check out our other article: How to Write an Animated Video Explainer Script.

With so many cool animation styles to choose from, it can be difficult to narrow it down to the right option for your video. If you’re still not sure what types of animation are most appropriate for your video, click here to schedule a call with us to go over your video or check out this article which asks you questions to help you think about what style is right for you. 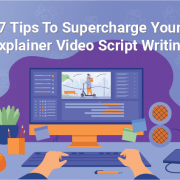 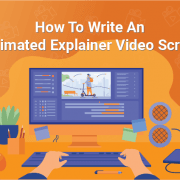 How to figure out the right animation style for your animated explainer vid...
Scroll to top